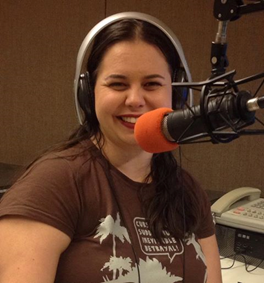 Rudi no middle name Bremer is my co-person (normal people might say ‘good friend’). She and I met at uni during her first year and my final year. Although she doesn’t remember the first time (I do) the second time she spilt fried rice in my carpeted hallway.

Rudi is Kamilaroi, she attended her first Aboriginal rights protest at 11 days old. Rudi is currently a mature aged student undertaking Honours while working two jobs.  Having previously completed studies at Naisda, Rudi is a former professional dancer. Rudi completed her BA Communications (Writing and Cultural Studies) last year while working the previously mentioned two jobs, including a cadetship with 2SER where she is now a DJ and Producer. Producing and presenting the Thin Black Line (Indigenous Program) since 2012. In 2013 she began producing 2ser Breakfast on Wednesdays and joined the Breakfast news teams on Fridays. Rudi has just this past month started presenting the Drive program. Rudi has served as Indigenous officer at UTS, helping to build a fledgling collective up and serving on the SRC. Rudi was also a fundamental part of the Wom*n’s collective, assisting me when I was Wom*n’s officer. She has also been an AIME mentor and is involved with her community.

Rudi is an amazing person, last year I called her at a time that should be illegal to call. There was a fire in my building and I was stranded in my PJ’s. Rudi came and picked me up and took me home. Where I stayed for two months. Rudi looked after me through many panic attack while I was told conflicting stories about the condition of my flat. She liaised with my work when I was too distraught and with the help of her dad she moved me. We had three days and no electricity in a smokey, wet building. I suspect she would do this for anyone, not just a co person. Rudi is the kind of person who looks after strays. She has supported myself and so many other people through so many things I can’t possibly do her justice.
Posted by Celeste Liddle at 10:00 AM