Day four brings us Alison Whittaker. A wonderful thing has happened here because in the first instance, Alison wrote her own profile which I was stoked about. I had hoped some people would write their own as I truly believe that most of us don't take the time to recognise ourselves and the impact we make. Then as I was gearing up to publish Alison's entry, I received another nomination through for Alison, this time from Dureshawar Khan Yousafzai. In light of this, I would like to thank both women for their submissions and the opportunity they have provided me with to run these two views back-to-back. One compliments the other incredibly well, and it's my pleasure to present them. First is Alison's piece and then Dureshawar's piece will follow after the second photo.

I’m a Gomeroi, queer lefty law student studying in Sydney, I work in gendered violence and in law reform, and I’m hoping to complete my honours with a body of research and analysis on deconstructing the liberal autonomous legal subject as an artefact of whiteness, maleness, ableness and cishet-ness in settler law. I have every intention of becoming an academic and a barrister, and I would like to specialise in international and domestic law with regards to sovereignty, and the potential for black nationalism.

I saw a big hole in black and women’s representation in the early days of my degree and I’ve tried to fill it, with varying success. I’ve learned more about advocacy and activism from my failures than from my successes. Sometimes it’s about building your own space, rather than searching for a place in the system. I started an Indigenous collective at my university, and I worked on other platforms to advocate for better standards of black education. I’ve been working to make universities and organisations more critical of their tokenistic engagement of black students, and the black community at large. I’ve built movements against anti-choice groups on campus. However, so rarely do I ever get to tackle black women’s issues, or explore those axes of oppression, so as a student, I’d imagine that would be my next step before I put on any graduate robes! 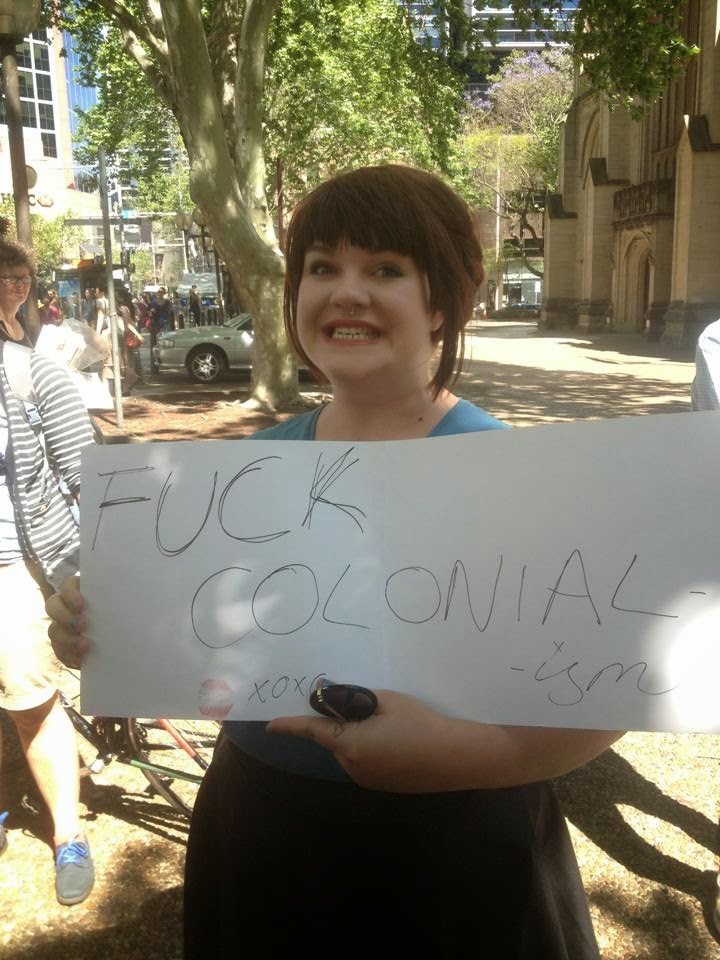 Alison and I first met at some ungodly hour on the staircase of a girl’s dormitory at a National feminist conference held in Melbourne last year.  I was having a long rant about increasingly white feminist spaces to anyone and everyone who would listen and Alison joined in. Two hours passed on the freezing cold landing and everyone else had since found the comfort of their warm beds. I found the comfort of sisterhood in Alison Jane Whittaker.

If you haven’t met Alison, let me tell you, this Gomeroi woman is a powerhouse! She is currently pursuing a Law degree at University of Technology in Sydney, regularly organizes and attends rallies, runs several social groups on campus while maintaining an online presence that sends most internet racists and misogynists into foetal position. Alison has had a long illustrious career in student politics where she has drawn attention to the needs of students of culturally and sexually diverse backgrounds.  Listening to her speak of her People while leading the Indigenous caucus at NOWSA 2013 was an experience that changed me as a feminist. I am forever grateful to her for taking the time to educate conference delegates like myself whose only education about the Black struggle in Australia has come from the pages of the white man’s history books.  She didn’t owe us this discussion or explanation, she didn’t need to open up such triggering chapters of history for the room to comprehend, it was not her job to educate us and yet she patiently answered all the questions put to her and got us to question what we thought we knew about Australia’s history.  And she did this without softening any blows, with brutal honesty wrapped eloquently in razor sharp wit- something I hope to learn from her over the years of our friendship to come.

Alison’s gift to me was teaching me to be proud of whom I am. Before I met her, I was not very vocal about my own tribal background (I am a Yousafzai woman of North western Pakistan).  Years of Western media coverage had made the proud Pukhtana in me to withdraw into a shell. Hearing Alison speak about her Country and her People made me at ease to share my story with her and over time with others.  For this I will forever be in her debt.

Alison Jane is a strong Gomeroi woman who leads by example. Her dedication to the cause of her People, her ability to bring crowds of onlookers to attention when she speaks, her infectious laugh and bubbly personality are just some of the qualities that make her Ms NAIDOC in my eyes.  Sister, you are well and truly a Queen.  Thank you for being unapologetically you.
Posted by Celeste Liddle at 8:18 AM