Welcome to Ms NAIDOC Day 2! Today's profile was submitted by Sarah Henderson, our day 1 Ms NAIDOC. Please keep them coming in folks. I have had utterly fantastic entries but I definitely need a few more and would dearly love to feature, in particular, some older women and some girls. 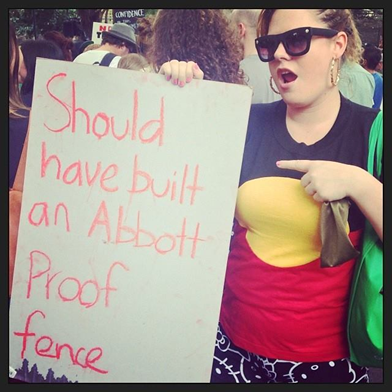 Ebony Allen is a Sydney based professional originally from Byron Bay. Her Mob are Kamilaroi and Dharug.

Ebony and I met via twitter, although we went to the same university and our times there overlapped.  I am now lucky enough to know her in real life and consider her a good friend, mentor and supporter.

Ebony is a well-known blogger on Indigenous issues and dating.  The image I’ve included was taken at the March in March and went viral instantly. Ebony uses her online profile to challenge racist or privileged behaviors; recently she called out a model over blackface which lead to her ‘educating’ the individual involved and her supporters.

Ebony has been admitted as a lawyer of the Supreme Court of NSW and has represented Traditional Owners in NSW in Native Title applications. Ebony has been a member of the NSW Premier’s Council for Women, the NSW Youth Advisory Council and various other appointments including Young Australian of the Year for Byron Bay. She was also an inaugural delegate to the National Congress of Australia’s First Peoples. Ebony currently works for City of Sydney as a Community Engagement Co-ordinator working on projects that fall under the Eora Journey. Her professional experience is extensive for someone her age.

Ebony is also heavily involved with community and passionate about supporting our youth (myself having the dubious honour of being one of those youth at two years her junior). Ebony has a strong sense of identity and her pride in our peoples and support of them is intense. Ebony will come to the rescue when someone is suffering, even when experiencing her own difficulties in life. She constantly puts those around her first.
Posted by Celeste Liddle at 8:15 AM